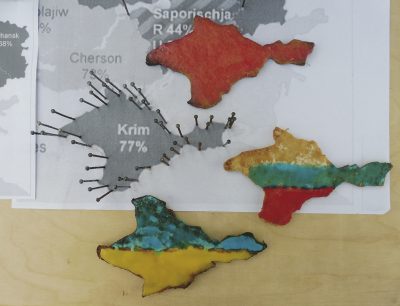 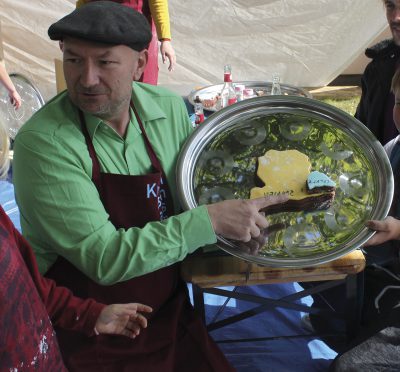 Spanien vor der Abstimmung (Spain before the elections). We savour national delicacies and transpose borders by the laws of daily updated and historical tastes. Contains traces of regional and national peculiarities, as well as sugar and colored fondant (rolled). Ruppe Koselleck, 2017

Eat cake and forget it

Susanne von Bülow and Ruppe Koselleck hammer nails along the borders marked out on modern and historic maps mounted on wooden boards. A strip of metal is then moulded around the nails to form the outlines of current or former states. Thus, Germany, Turkey or Poland turn into either smaller or larger cookie cutters that reflect the constant flux in the shape of national borders over time.

At the “Zentrum für Peripherie”, children, parents and young people are working away on their countries of origin together with the artists. Among other things, they brought the Soviet Union back to life and then let it break up again, they made Crimea Cookies or came up with a Brexit Cake. All parts of the country, border sections, enclaves or exclaves are topped with icing dyed in different colours and labelled in pen. Quite by the by over coffee and cake, a conversation develops about the gravest of conflicts. This is because history has never been so delicious!

Our communicative shortcomings are actively dissolved in the mouth and the stomach through the act of eating. The performative aim of EAT CAKE AND FORGET IT is to create a climate which engenders an anxiety-free, serious and pleasurable exchange of experiences and cake for everyone – children, mothers, Turks. When eating and forgetting, memories are processed in such a way that we can talk about them, reflect upon them and while breaking bread at the same table as it were, we can literally eat up the historical and contemporary boundaries that divide us.

Susanne von Bülow, painter and printer, was born in 1969 and studied history and politics in Bonn and Berlin, as well as fine art at the Münster Academy.

The conceptual artist Ruppe Kosselleck was born in 1967 in Dossenheim. He studied philosophy and sociology in Cologne and Münster, switching to the Münster Academy in 1994. Ruppe Koselleck’s art is influenced by Dada, Fluxus and Concept art. He generates processes, which he often allows to unfold over very long periods and in which deploy the most diverse media.