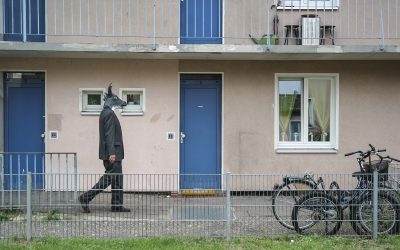 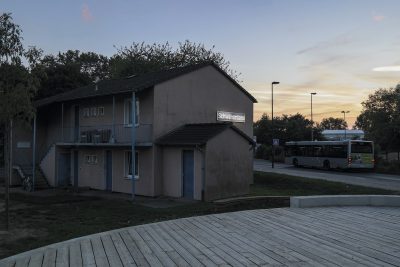 Swaantje Güntzel was born in 1972 in Soest and studied anthropology at the University of Bonn and fine art at the University of Fine Arts Hamburg. She has held stipends in Austria, Denmark, Finland, Sweden and Greece. She has exhibited her work throughout Europe. She frequently uses her performances to address the topic of increasing environmental pollution through plastics.

Jan Philip Scheibe was born in 1972 in Lemgo and studied object design at the Aachen University of Applied Sciences. His work focuses upon public space sculpture, light installations and interventions. Both artists take an active interest in the environment and the various ways people treat it.

In September 2018, Scheibe & Güntzel took quarters in the artists’ residence at the Wittenberger Weg neighbourhood. During their residency, the two artists explored what had been cultivated on the land in that area before it became urbanized. They also explored and used in various installations and performances how the local inhabitants of the neighbourhood cultivate and collect vegetables, fruits, nuts, and berries in their gardens, in parks and in open public areas today.

Viewing the estate as an urban island in the South of Düsseldorf, the artists approached the place and the locals both intuitively and systematically. Their focus was upon the relationship between man and nature – a recurring theme in all of their projects. Their presence and animated curiosity in the people and the stories from the estate allowed them to glimpse beyond the facades of the buildings and to extract hidden knowledge from the narratives. Using photography and a diarised journal, they were able to document their impressions and translate their experiences into performative interventions.

Schwemmland (floodplain) describes the spot as a fertile area with a rich soil bolstered by the sediment from the floodwaters of the adjacent Rhine. Used for centuries as agricultural land, the earth still holds the promise of an abundant yield. But what is cultivated nowadays on the estate and what do the residents do for food? There were nine individual actions in total, all of which aimed at bringing man and nature together once more via a revisiting their roots. The large hazel tree – under the canopy of which Jan Philipp Scheibe sang his song of Autumn – became the place of encounter producing a sense of togetherness beyond all disparity. In their playful way, the artists invoked a consciousness for sustainability as everyone gathered, roasted and distributed the cobnuts from the tree. Scheibe & Güntzel create images that don’t overwhelm the viewer, but have a lasting effect by virtue of their intensity. Thus, art becomes a kind of sustenance out of which associations, interrelations and scope for the new can arise and grow.